The NHS in 2015: The health policy landscape at the beginning of the new government

The NHS is threatened by a funding gap which has been extremely well publicised and is projected to be as large as £30 billion per year by 2020/21 if no action is taken to reduce it. NHS England have claimed that £22 billion of efficiency savings can be made within the NHS over the next five years, however, even if currently achieved yearly efficiency gains were doubled (the NHS is already striving to maximise efficiency) by 2020, we could still be looking at an annual funding gap of £16 billion. Making further savings by increased efficiency therefore seems optimistic, especially considering the needs of the UK’s ageing population and rising levels of chronic disease. Efficiency gains achieved by the NHS only amounted to an average of 0.4 per cent per year between 1995 and 2010; whereas it is estimated that annual efficiency gains would have to be of between two and three per cent to close the anticipated funding gap.

The contemporary health care needs of the British population have also greatly changed since Beveridge’s day. His 1941 ‘giants of too little’ (want, disease, squalor, ignorance and idleness) threatening the health of the population have been replaced with Le Grand’s 2014 ‘giants of excess’ – those of over-eating, excessive tobacco consumption and high levels of sedentary activity. The NHS, which has had no structural overhaul since its formation, is struggling to treat twenty-first century diseases such as cancer, diabetes and cardiovascular disease with the same approach as was employed in Beveridge’s day to treat communicable diseases.

The above strongly suggests that the NHS cannot survive in its present form. A national post-election debate on the future of British healthcare seems inevitable, and in order to inform such a debate, a considerable amount of research will be needed to influence those important decisions that will affect the NHS for many years to come. 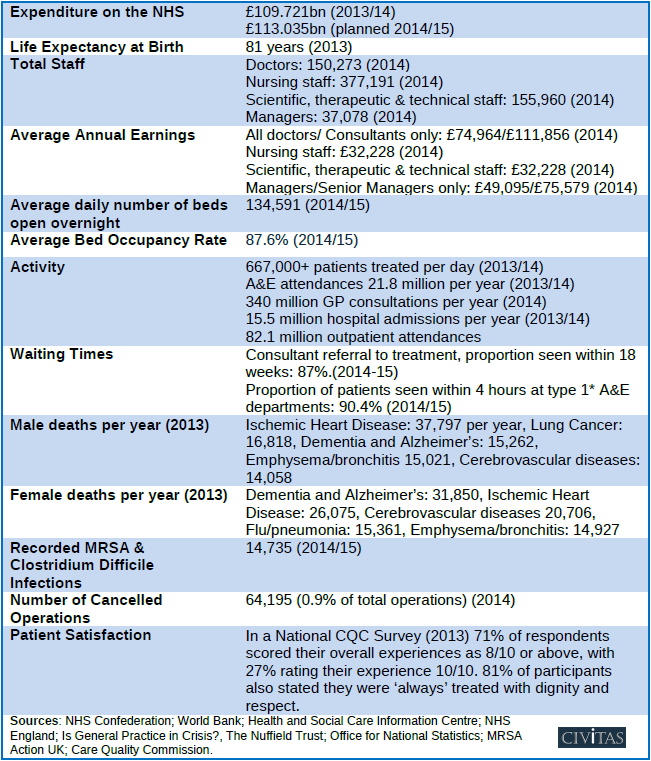 The Coalition Government’s Health and Social Care Act of 2012 has been advocated by some as providing a structure for governance and accountability which might stand the test of time; but the legislation has also received criticism, with for example the King’s Fund concluding that its top down reorganisation of healthcare services was ‘both damaging and distracting’, in effect doing more harm than good.

The 2012 act introduced key reforms operative from the 1st of April 2013. These included:

• The establishment of 211 Clinical Commissioning Groups (formed of groups of GPs and other health professionals) in place of Strategic Health Authorities and Primary Care Trusts.

• The removal of responsibility for the health of British citizens from the Secretary of State for Health, and the shifting of many responsibilities from the Department of Health to a body now called NHS England.

• The granting of foundation trust status to former NHS trusts.

• The establishment of a regulator Monitor to manage competition between providers.

• The transfer of responsibly for public health to local authorities.

As the coalition government’s term of office progressed, many of the stated priorities of the Health and Social Care Act were in fact neglected in favour of increasing efficiency and more effective monitoring of patient safety and care quality.

The Liberal Democrats voiced concerns regarding certain aspects of the Health and Social Care Act, and have encouraged the integration of health and social care budgets while in government. The Liberal Democrats were also instrumental in ensuring the passing of the Care Act in 2014. This legislation made it a local council’s duty to promote carers’ wellbeing, enabled people in need of care to access financial advice and gave them the right of appeal against councils’ decisions regarding eligibility for care.

The growing pressures on the NHS as cited at the top of this page imply that many of the ‘missed targets’ (such as waiting times for A&E or to see consultants)reported in the media may well have occurred whatever political party happened to be in power. However, an important debate must be centred on just how much better or worse the financial situation of the NHS might have been had the Health and Social Care Act not been passed. 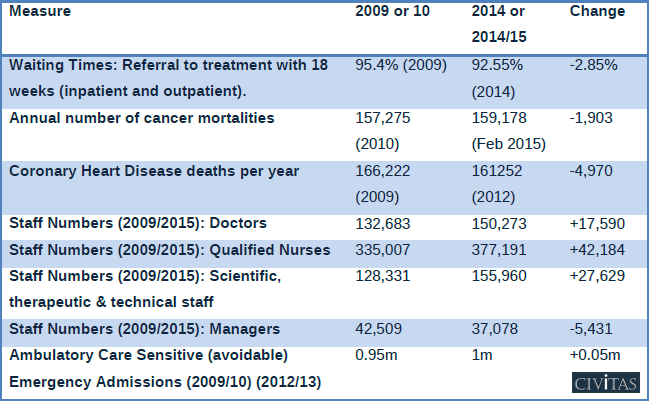 One worrying development in the year 2011/12 has been the government’s decision to cut avoidable inequality weightings in NHS funding; this marks a radical departure from the NHS’s previous objective of reducing inequalities in avoidable health outcomes.

The organisation Monitor has been established to prevent anti-competitive procedures in the provision of NHS services that are deemed to be against the interests of patients. The Health and Social Care Act only advocates competition where it might serve the interests of citizens and enhance their choice.

The Conservative-Liberal Democrat coalition’s health reforms have proved controversial. Though there have been successes and failures during their term, targets have been missed and standards may be slipping. Particularly noticeable have been the problems associated with waiting times for A&E and other consultations, however many observers and commentators see these as being the inevitable result of the demographic factors discussed above.

The new Conservative government will certainly have to act creatively and decisively if it is to safeguard the financial sustainability of the NHS and meet the ever increasing demands upon it.