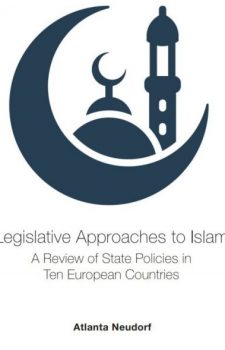 Legislative Approaches to Islam: A Review of State Policies in Ten European Countries

This short introduction to Islam in Europe provides an overview of recent legislation and policy approaches to Islam across 10 European countries. It outlines legislation and regulation on the wearing of Islamic headwear, halal slaughter, Islamic religious marriages (and divorces), Islamic education (such as madrasas), and Acts which have had a demonstrable effect upon Islamic practices.

This book is intended to provide the reader with a short overview of policy and legislation across 10 countries: Austria, Denmark, France, Germany, Hungary, the Netherlands, Poland, Sweden, Switzerland and the UK.

Some of Europe’s most populous nations such as France have passed a remarkable number of Islam-targeted laws, while others – including the UK – have to a large extent not specifically done so at a national level. By comparison, nations such as Switzerland, Austria and Denmark have been particularly active in legislating against specific Islamic customs.

In this comparative analysis:

This introductory text looks at specific European country’s policies towards Islam and its practices, as well as legislation that has affected Muslims. Each chapter is divided into the five specific areas above with a snapshot of recent legislation and policy. The author, Atlanta Neudorf, uncovers a wide range of stances taken by European governments towards Islam, and the differing methods by which they have enshrined their approaches in law.