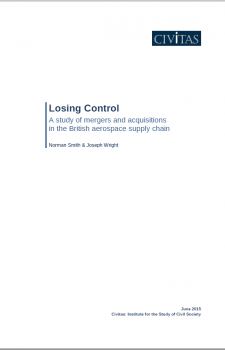 Losing Control: A study of mergers and acquisitions in the British aerospace supply chain

While the general decline of British industry has been widely documented, it is often presumed that aerospace has remained largely immune. It is one of Britain’s most important industries and is championed by the government as having a bright future.

The observations in this study of the aerospace supply chain suggest otherwise. Based on the analysis of an archive of sales and related literature from a company’s technical library, the authors examined what has happened to part of the aerospace supply chain, specifically the survival and ownership of the British companies, in the period 1990-2014.

Among its findings are that the supply chain has contracted since the 1990s and severely weakened by a high level of foreign and domestic mergers and acquisitions. Of the companies recorded as still active in the chain by 2014, just a third had avoided a takeover. Of those that had not, almost half had become foreign owned. As a result, foreign ownership overall rose from 14 per cent in 1990 to 41 per cent in 2014.

The report also documents a strategy of ‘cherry picking’ by British and foreign acquirers, where companies were taken over primarily for their valuable intangible assets, such as brand reputation, intellectual property (technology) or market position. The result of this, and the sheer volume of M&A activity, has been to leave the surviving British-owned companies heavily skewed towards small and medium-sized enterprises (SMEs), few of which may ever reach the minimum economic scale to grow into significant members of the international aerospace industry.

The report makes the case that internationalisation of the aerospace supply chain has not been a clear benefit to Britain. Gains from foreign investment usually occur from greenfield investment – which is increasingly rare – or when the new parent company sees its UK subsidiary as an important part of its global operation and continues to invest, carry out R&D and upgrade the skills of the work force after the acquisition. This has clearly not been the driving force behind the trends recorded in this sample of aerospace company.

The report also examines regulatory regimes in other countries, including those inside the European Union, to show how anomalous the UK is in its position on foreign takeovers, and recommends that more be done to prevent major future losses to British industry.

‘…rebuilding British industry is a colossal task in itself; but to do so whilst leaving companies exposed to the same practices that sped its initial decline is more than a little unwise. As long as it remains easier to acquire companies in the UK than in other developed countries, the UK is likely to attract disproportionate attention from overseas corporations…’

Norman Smith is a former director general of the Department of Energy’s Offshore Supplies Office (OSO), the government agency which supported British suppliers to the North Sea oil and gas industry. He subsequently co-founded and managed an energy consulting company and served as director of eight private companies in the oil and gas industry, becoming chairman of three. Since taking retirement he has conducted extensive research into the British supply chain supporting exploration and production activities in the North Sea.

Joseph Wright is the research fellow for Civitas’ Wealth of Nations project. He studied Theology and Religious Studies at the University of Bristol (BA). His other reports include Credit Unions: A Solution to Poor Bank Lending?