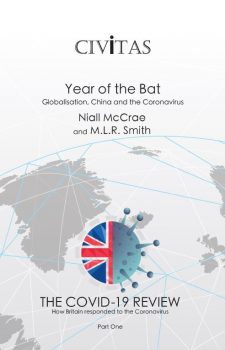 The Covid-19 pandemic has exposed the underlying flaws of globalisation. The ideology of globalisation based on the notion of an increasingly borderless and interdependent world and in which the nation state would whither, is now seriously in question.

In this book, Niall McCrae and M.L.R. Smith argue that, as the virus proliferated, China tried to cover up the contagion and did little to stop its worldwide spread from the initial source in Wuhan. In the absence of proper scrutiny and accountability, international organisations like the World Health Organisation (WHO) have become captured by the interests of authoritarian states. Beholden to Beijing, the WHO was complicit in failing to pass on adequate warning of the seriousness of the pandemic. The claim that the infection began at a traditional ‘wet market’ has become a convenient narrative, possibly masking other sources in China.

The book finds that while the pandemic was made in China, the conditions that gave rise to what they call the ‘Year of the Bat’ also arose from the assumptions of globalist thinking in the West. Globalist approaches have underpinned extraordinarily poor policy choices. A resetting of the international order is now needed.

In considering ‘where to go’ in the aftermath of the Covid-19 crisis, the authors argue for a mix of practical policy responses in order to sustain a genuine liberal international system, rather than one consisting of multinational institutions. It argues that the Chinese state should be regarded as a rival ideological power – and Britain should not regard itself as China’s ‘best partner in the West’. Ultimately, they conclude China and the World Health Organisation must be investigated for their handling of Covid-19, particularly in the early stage of the contagion.