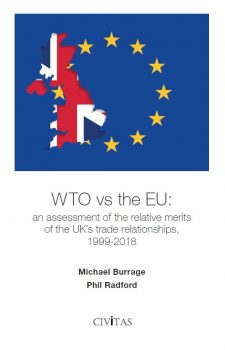 WTO vs the EU: an assessment of the relative merits of the UK’s trade relationships, 1999-2018

A fundamental issue at the heart of Britain’s political discourse since the EU referendum has been the comparison of merits of trade as an EU member and those under WTO rules. In this report, Michael Burrage and Phil Radford compare UK trade as conducted within these two trade relationships, in both goods and services, over the two decades from 1999 to 2018.

By comparing UK trade with the 14 other EU members in 1999 in relation to that of the UK’s 14 major export markets under WTO rules – a trade of an approximately similar value – the authors discern a series of significant trends, including:

• Over the two decades, UK goods exports to eight of the EU14 have fallen rather than grown. By contrast, goods exports have not fallen to any of the WTO14 and collectively have grown six times faster than exports to the EU14. It is emphatically trade with the WTO14 that has created jobs in the UK over these two decades, not trade with the EU.
• On individual EU agreements, aggregate trade data shows the real growth rate of UK goods exports to the 88 countries and jurisdictions covered by 70 such agreements was slightly below the real growth of exports to the remaining 117 countries of the world with which the UK trades under WTO rules.
• IMF data for 2010-2018 shows services imports to the EU from the United States and numerous other countries trading with the EU under WTO rules have grown faster than those of the UK, throwing doubt on the idea that UK services exports have benefited from EU membership.

Michael Burrage and Phil Radford conclude that future UK trade policy should not be based on an agreement with the EU which tries to stay close to the existing trade relationship, by a so-called level playing field or other commitments. That agreement would only perpetuate the problems of sub- and near-zero export growth and an ever-mounting deficit. Their report suggests that future UK trade policy should be built on the proven success of trade under WTO rules, and wherever possible negotiating well-targeted agreements to improve trade with existing WTO partners.

Michael Burrage wrote for The Telegraph, ‘Is trading under WTO terms really so difficult?’