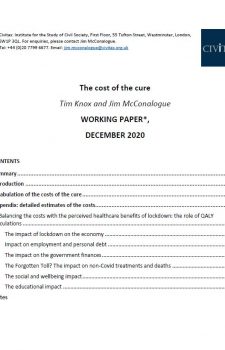 As the UK government publishes its cost-benefit analysis of lockdown, Tim Knox and Jim McConalogue attempt to quantify the estimated costs that have been incurred in a new Working Paper, The cost of the cure.

Their estimates can be used as a benchmark against which the government analysis can be measured.

They find that the cost per year of life saved (QALY) ranges from nearly three times more than what the NHS is usually prepared to pay to over 80 times more.

The authors accept the limits of their analysis:

But this makes it all the more important that the UK government publishes its forecasts of the financial, economic and wider impact of the measures it has and is taking. These forecasts can then be assessed and scrutinised by Parliament, by future inquiries and by the wider public.

This Working Paper is subject to ongoing revision. Any feedback or criticism are welcome.