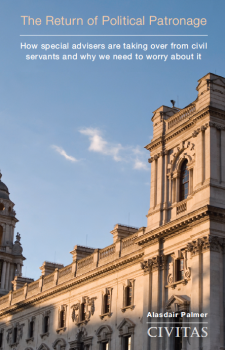 The Return of Political Patronage: How special advisers are taking over from civil servants and why we need to worry about it

The special adviser – or ‘spad’ – has become firmly established in Westminster folklore over the past two decades, coming to symbolise much that is questionable about modern politics. The likes of Jo Moore, who urged colleagues to use 9/11 to bury bad news, and Damian McBride, who schemed on behalf of Gordon Brown against members of his own cabinet, have lent the Whitehall caricatures of the television comedy The Thick of It more than a veneer of credibility.

But the implications for government of this growing cadre of politically-motivated apparatchiks are no joke, extending well beyond the chicanery of a few high profile figures. In this excoriating account of contemporary government, Alasdair Palmer – who has worked up close with spads in the Home Office and spent years documenting Whitehall machinations as a journalist – portrays the return of political patronage to the highest levels of our public administration.

It is a phenomenon that the Northcote-Trevelyan reforms of the mid-19th century were meant to banish, and one which now threatens Britain’s rare and precious heritage of relatively efficient, relatively uncorrupt government.

‘The practice of good government in Britain has not been lost – yet. But it is changing, and in ways which could eventually lead to the disappearance of impartial scrutiny of government policy by civil service officials.’

Alasdair Palmer was born in London and read history and philosophy at Cambridge. He has worked for Granada Television (now ITV), The Spectator and The Sunday Telegraph, where he won the Charles Douglas Home Prize for Journalism in 2002. He has been a creative consultant for HBO in Los Angeles and spent 18 months at the Home Office as a civil servant, observing the relationship between ministers, special advisers and civil servants while writing speeches for Theresa May. He currently is writing a television drama series about human rights with Peter Berry. He is married with two children.