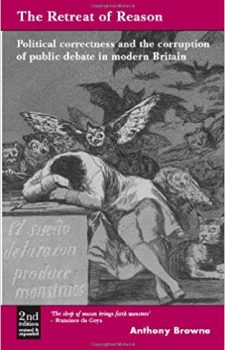 The Retreat of Reason: Political Correctness and the Corruption of Public Debate in Modern Britain

For centuries Britain has been a beacon of liberty of thought, belief and speech in the world, but now its intellectual and political life is in chains. Members of the public, academics, journalists and politicians are afraid of thinking certain thoughts.

People are vilified if they publicly diverge from accepted beliefs, sacked or even investigated by police for crimes against received wisdom. Whole areas of debate have been closed down by the crushing dominance of the moralistic ideology of political correctness.

Political correctness started as a study of cultural Marxism in Germany in the 1920s, and was adopted by the 1960s counter culture, eager to promote tolerance and alternatives to the conservative values of the time. Political correctness quickly infiltrated US academia and spread its tentacles across the West. By the early twenty-first century, political correctness had completed its long march through the institutions in Britain, and had ensnared almost all of them, from schools to hospitals, from local government to national government, and from major corporations to the police, army and the church. In 1997, Britain became governed for the first time by a government largely controlled by politically-correct ideology.

Its influence has spread across the entire policy range, not just women’s pay and race relations, but education, health, law and order and the environment. It is upheld by a powerful array of lobby groups, from Liberty to Amnesty International, from Friends of the Earth to Refugee Action, and an array of domestic and international laws, charters and treaties.

Starting as a reaction to the dominant ideology, it has become the dominant ideology. It defines the terms and parameters of any national debate. Anything that is not PC is automatically controversial. Across much of the public sphere, it has replaced reason with emotion, subordinating objective truth to subjective virtue.

In the early days, political correctness brought benefits as it helped spread decency and consideration to the more vulnerable members of society, from the handicapped to women to ethnic minorities.

But, as political correctness spread and deepened its influence, it became more dogmatic and intolerant of dissent, until it became a betrayal of the very liberalism that first fuelled it. It has lead to new political censorship laws being introduced to curb freedom of speech, and membership of legal democratic parties being curtailed.

Rather than opening minds, it is closing them down. The aim of political correctness is to redistribute power from the powerful to the powerless. It automatically and unquestioningly supports those it deems victims, irrespective of whether they merit it, and opposes the powerful, irrespective of whether they are malign or benign. For the politically correct, the West, the US and multinational corporations can do no good, and the developing world can do no wrong.

Political correctness is often ridiculed, but it is more than just a joke. With its earlier benefits already won, it has now become a hindrance to social progress, and a threat to society. By closing down debates, it restricts the ability of society to tackle the problems that face it.

PC promoted multiculturalism in the Netherlands while silencing debate about its drawbacks, until the results exploded in religious violence leaving much of the country living in fear. In Britain, it allowed the creation of alienated Muslim ghettoes which produce young men who commit mass murder against their fellow citizens. By promoting the rights of criminals over their victims, it hinders law enforcement and leads to escalating crime. By challenging the authority of teachers, it fuels poor discipline in schools, and by promoting equality over excellence, it degrades the standard of education and inflates exam grades until they become almost meaningless.

By silencing debate and curbing objective analysis, political correctness can harm those it intends to help. The victims are taught to blame others for their vulnerability, discouraging them from taking responsibility for improving their lives if their problems are self-inflicted.

Black communities are encouraged to blame racist teachers for the failure of their boys at school, rather than re-examine their own culture and attitudes to education that may be the prime reasons. The poor sick have ended up having worse healthcare in Britain than they would in mainland Europe because PC for long closed down debate on fundamental NHS reform. Women’s employment opportunities can be harmed by giving them ever more rights that are not given to men. The unemployed are encouraged to languish on benefits blaming others for their fate. Poor Africans are condemned to live in poverty so long as they and their governments are encouraged to blame the West for all their problems, rather than confronting the real causes of poor governance, corruption and poor education.

Political correctness once had a purpose, but it now causes much more harm than good. For the last few decades, reason has been in retreat—but the time has come for reason to advance once again.