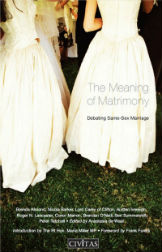 In July 2013, the UK Parliament passed historic legislation to open up marriage to same-sex couples. It followed a bitter row both inside and outside the Palace of Westminster which laid bare some of the deepest divisions in our modern society.

The Meaning of Matrimony: Debating Same-Sex Marriage captures that argument in a series of passionately-written essays exploring the subject from all sides. With contributions ranging from Lord Carey to Peter Tatchell, the book seeks to provide a definitive guide to a debate which has encompassed much more than simply allowing same-sex couples to wed.

Should marriage embody ‘tradition’ or social change? What is the function of marriage in society? Along the way, questions are also asked about the nature of the debate itself, whether there has been adequate discussion, and where the balance should lie between legislation and social attitudes?
Alongside opponents and advocates of the legislation are contributions from academics who bring cold scrutiny to some of the most hotly-contested arguments.

Lord Carey insists not all relationships are the same and that without the possibility of procreation the institution of marriage will be diminished and “emptied of its meaning”, with grave implications for the family unit.

His thoughts are echoed by further contributions from Austen Ivereigh, director of Catholic Voices, Brenda Almond, Emeritus Professor of Moral and Social Philosophy at Hull University, and Brendan O’Neill, editor of spiked.

Pitted against them are leading supporters of gay marriage including the then Culture Secretary Maria Miller, Peter Tatchell, Stonewall chief Ben Summerskill and Conor Marron, of the Coalition for Equal Marriage.

Encompassing family ideals, society’s treatment of homosexuality, and crucially the kind of society we want to be, the gay marriage debate entails much more than a legislative redefinition. The Meaning of Matrimony confronts many of the key dilemmas we face as a developed society in the twenty-first century.

Anastasia de Waal is a social policy analyst and Deputy Director and Director of Family & Education at the thinktank, Civitas. A regular contributor to broadcast and print media, she is a qualified primary school teacher and Chair of the national parenting charity, Family Lives.