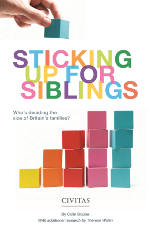 Sticking Up For Siblings

Why is it that children without siblings in this country are almost twice as common as they were a generation ago? Surely it is a natal no-brainer? Childcare, time off work, the price of an extra bedroom.

To cap it all, the Government has slashed child benefit. Little wonder then that more than half of couples with an only child say they cannot afford another. Better, they think, to channel those scarce parental resources into giving the best chances to one.

But as the fashion for the one-child family catches on, Colin Brazier asks whether there is a cost – for parents, society, and for children themselves.

Brazier has spent five years rounding-up international data to build a compelling counter-argument aimed specifically at the growing number of ‘one-off parents’: mums and dads who feel they cannot afford to give their only-child a sibling. Brazier also draws on his years as a foreign correspondent to consider attitudes to siblings abroad, as well as his experience as a father of six, to assess how attitudes are evolving here in the UK.

In particular he shows that, all other things being equal, having a sibling means that children are healthier, as well as less prone to the epidemics of modern childhood – obesity, allergies, and depression. They also tend to be more well-rounded, since their contact with siblings endows them with valuable soft-skills ranging from empathy to gratification-deferment, from risk-taking to the accumulation of moral capital.

By turns funny, serious and thought-provoking, Sticking Up For Siblings demonstrates the hidden advantages of a multi-child family – in a society where siblings are increasingly scarce.

“Brazier’s book is not a polemic calling for higher birth rates or warning of the future consequences of low fertility levels… Rather, it is aimed at helping parents who would like more children but are fearful of the strain.”
Catholic Herald

“Humorous at times, yet inciteful and informative always, Colin presents a strong case for siblings in an affable and reasoned manner.”
Tania Sullivan, Larger Family Life

Colin Brazier is a presenter with Sky News. He began his career in newspapers, working for the Yorkshire Post and Observer, before moving into broadcasting, with the BBC, ITN and, since 1997, Sky. He was awarded a Gold Medal from the New York TV Festival in 2001 for his dispatches from Afghanistan and was the first European reporter to reach Baghdad during the invasion of Iraq in 2003.