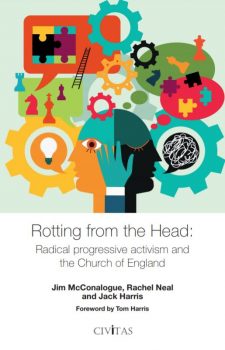 Radical progressive activism and the Church of England

In a new report, researchers have set out to investigate the scale of support for ultra-progressive radical activist agendas alleging ‘systemic racism’ in English society, the understanding and use of ‘unconscious biases’ and prescribing a ‘climate emergency’ doctrine within the Church of England.

As Tom Harris writes in the Foreword, this ‘complete departure from the Church’s central purpose risks making it unrecognisable to the grass roots members who support it’. It marks a ‘separation of the head from the body that is becoming alarmingly recognisable in so many of our national institutions’.

This report surveys the growing adoption of ultra-progressive values by the Church of England. The research examines the reported instances of clergy involvement in campaign messages which supported their faith in those doctrines across the 42 dioceses of the Church. By observing and recording the involvement of the appointed Bishops, vicars, Rectors, ministers or other clergy in those campaigns, we found that some measurement could be made of the clergy-adopted progressivist values within each diocese.

‘There is a common denominator of leadership acquiescence or a particular vulnerability among leaders about their approach to society, ordinary human values and a laziness in objecting to questionable claims and narratives, often to appease relentless and large-scale agitators.’

In the immediate response to the Black Lives Matter protests across the United States, the Archbishop of Canterbury was quick to denounce the seeming ‘ongoing evil of white supremacy’, saying that ‘systemic racism’ continues to cause ‘incalculable harm across the world’.

As this report shows, local clergyman in dozens of areas across the country have pronounced similar views on what ‘institutional racism’, ‘white supremacy’ and the seemingly-continuous evil of racism means for Britain.

Even though the effectiveness of unconscious bias training has now been questioned for its ability to do anything about our unconscious and dismissed by public authorities claiming there is currently no evidence that this training changes behaviour or improves workplace equality, the practice is another ritual of ultra-progressivism that has seeped into the life of the Church of England.

As the second chapter shows, in total we find over a quarter of all Dioceses (11 of 42) appoint clergy who appear very supportive of a commitment to unconscious bias training within the Church.

‘A theme throughout this report is the growing perception inside the Church that by adopting ultra-progressive views or applications such as UBT it will have a greater reach with people and therefore increase participation rates.

‘But this focus on “radical inclusion” risks leading the Church towards a different path in which its main preoccupation is with HR managers, diversity officers or extending anti-racism bureaucracy rather than fulfilling its real purpose as a place of worship.’

Beware of the ‘Climate Emergency’?

The final and third chapter of this report looks at the way in which the Church has adopted the notion of a ‘climate emergency’. This is the idea that unless immediate and drastic action is taken now to reduce global emissions then nothing short of a crisis will come about.

Almost revolutionary in its ambitions, this alarmist notion of a ‘climate emergency’ signifies a drastic shift across the Church of England. However, despite increasing its support for the notion of a climate emergency, it is very rarely presented by the Church as an argument which requires a balanced understanding.

Our chapter on climate activism shows that institutions throughout the Church’s hierarchy have adopted this ultra-progressive view without question. We found:

The researchers discussed in their report:

‘What has happened to the Church of England in the past year reflects the direction other British institutions are currently travelling towards. As institutions have declined in their authority, there is increasing anxiety within them to be justified.

‘This decline has run in tandem with a wider vacation of public life, meaning only a small number of activists are providing a path in defining the role and purpose of such institutions. Thus, ideologically, institutions like the Church are increasingly taking on the mantras of ultra-progressivism, such as the notion of ‘systemic racism’ or alarmist calls for a ‘climate emergency’.

‘These ideas are reinforced by new policies to achieve structural change via a growing bureaucracy, recruitment shortlists or quotas and rewriting education curriculums. That has, in turn, impacted the spirit and ideals of the Church’s mission.’