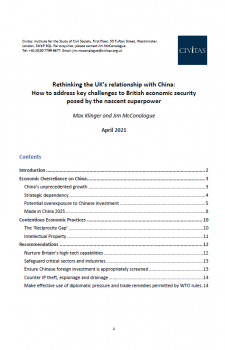 Rethinking the UK’s relationship with China: How to address key challenges to British economic security posed by the nascent superpower

‘British policymakers should think carefully about the degree of economic reliance on China that it is wise to tolerate where critical infrastructure is concerned’, a new think-tank paper suggests.

The research paper looks at the implications of China’s growing centrality to the world economy for the UK – and sets out a policy framework for addressing the risks it poses. It warns against ‘strategic dependency’ on China in critical sectors, and argues that faced with the rise of this new superpower it is crucial that Britain ‘position itself as a world-leader in high-tech fields.’

The scale of Chinese development in recent decades has been staggering. It has been one of the fastest-growing economies over the past 40 years and by the end of the 2020s is set to overtake the USA as the world’s largest. The report notes that:

‘…for over twenty years the idea that economic progress and greater prosperity would lead to the adoption of a more liberal, democratic political system in China was influential in guiding Western policy and behaviour. …However…it has not resulted in the liberal-democratic political shift that many had anticipated and hoped for.’

In recent years, the Chinese Communist Party (CCP) has demonstrated a reluctance to adhere to the norms of free trade and an increased assertiveness on the international stage. This, the report argues, necessitates ‘a commensurate adjustment in British strategic thinking’.

The report explores a number of contentious Chinese economic practices. These range from intellectual property (IP) theft and co-option to formal and informal discrimination in the marketplace, domestic subsidies, and restrictions on foreign investment. It outlines the strategic challenge posed by China’s immense ‘Made in China 2025’ industrial strategy – as well as various other ‘sweeping state-led initiatives’ – and investigates the extent of British strategic dependency on China.

The report concludes by setting out a range of policy objectives and proposals to guide future action. These include: