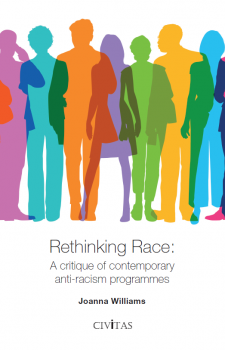 By almost all statistical measures, Joanna Williams argues, society is less racist today than at any other point in the past century – a point which is rarely celebrated. Still less is this considered a reason to leave people to negotiate inter-cultural and inter-racial relationships for themselves. Despite there being less racism today, the message from the media, best-selling books, diversity workshops held in schools, universities and the workplace, is that not being racist is no longer sufficient: we must all be actively anti-racist and demonstrate our anti-racism in ways approved by a cohort of race experts.

In this report, Joanna Williams investigates today’s anti-racism industry and how Critical Race Theory, newly migrated from academia, provides the theoretical underpinnings for the industry. New phrases have entered our public debate: terms like systemic racism, unconscious bias, white privilege and cultural appropriation. Anti-racism training has become a big business with the most popular speakers and authors generating considerable revenue.

The author asks the essential questions underlying this industry: what if this ubiquitous anti-racism programming does little to improve outcomes for members of the BAME community? Worse, what if contemporary anti-racism breathes new life back into racial thinking and emphasises differences between people that were only recently being overcome?

By drawing upon a wide range of academic and popular literature – as well as interviews with participants in workplace diversity training programmes and online content from training providers – this report explores how anti-racism has rejected the civil rights era aspiration for colour blindness, as people are once more being taught to see each other as racialised beings. White people are assumed to be the beneficiaries of ‘white privilege’ – and black people the victims of ‘systemic racism’. Such gross racial generalisations are to the detriment of everyone in society. The sole beneficiaries of this approach are elite race experts who find themselves in a powerful position to intervene in all aspects of our public and private lives.

The report concludes by drawing out several recommendations for schools, universities and workplaces, highlighting that no school pupil or university student should be taught critical race theory as fact, or have to undergo mandatory unconscious bias training. Williams argues for placing greater value upon viewpoint diversity, and what people have in common, rather than simply what divides us.