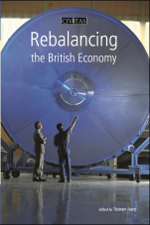 No other country in the world – including the United States – has allowed such a strong anti-interventionist economic policy to take hold in recent years. We, in Britain, have been restricted by the economic disasters of the 70s – which eventually required a bailout of over $4billion from the IMF – to such an extent that laissez-faire has ruled our ideological roost for several decades.

But things are changing and a cross-party commitment to the rebalancing of the British economy is beginning to emerge. It stems from a general recognition that unsustainable levels of public spending – financed by frothy tax revenues from a bloated financial services sector – have disguised a fundamental lack of competitiveness.

In this book, an array of leading economists and politicians, ranging from Labour’s former business secretary Lord Mandelson to Conservative MP Jo Johnson, consider the implications for financial services, the role of the state, manufacturing, exports and the composition of the boardroom.

Several authors focus on ways in which we might improve the competitiveness of the domestic banking sector which, they argue cannot be done in isolation from a wholescale reform of investment banking.

Others argue for an enhanced role for the state as a catalyser of business investment, one which should correct existing flaws in the shareholder return model of capitalism. It is suggested that the state must fill in for a private sector unable to revitalise British manufacturing, before embarking upon a strategy for encouraging its growth.

Tristram Hunt is Member of Parliament (Labour Party) for Stoke-on-Trent Central and Senior Lecturer in Modern British History at Queen Mary, University of London. In 2013, Hunt was promoted to the Shadow Cabinet as Shadow Secretary of State for Education.