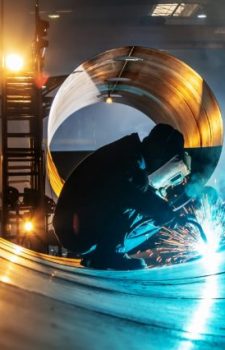 Prospects for a Global Britain: Three Strategic Export Industries and How Freeports Can Help

In the third of a three-part series on UK trade, Phil Radford looks at why manufacturing in strategic industries has either moved offshore or stayed offshore. Prospects for a Global Britain: Three Strategic Export Industries and How Freeports Can Help examines what the UK can do to bring it back or encourage new investment. Radford calls on UK plc to recognise where offshoring trends are ‘hollowing out’ UK manufacturing. He suggests that the UK can counter some of these trends with a radical extension of the freeport concept.

Radford identified and measured offshoring trends – sector by sector – in the two preceding reports: Lessons learned for a Global Britain: UK trade in manufacturing, 2000-2019, and Two tests for UK Trade. This final report aims to take the lessons and insights gleaned from those two reports. He identifies three big opportunities to boost global exports and cash in on Brexit: naval shipbuilding, global pharmaceuticals and offshore wind power.

Phil Radford has a stark message for UK plc: there is nothing to fear from inviting successful enterprises from outside Europe to come to the UK and help build or rebuild high-skilled manufacturing industries. And he suggests that an experimental approach to freeports could be help to pioneer post-Brexit de-regulation.

Naval Shipbuilding: Britain hasn’t exported a new warship larger than a patrol vessel for more than 30 years. With the 2019 demise of Fergusons on the Clyde, Britain’s commercial shipbuilding is effectively dead. To revive it, we need to attract pre-eminent marine engineering and expertise to Britain’s rusting slipways. Dedicated freeport shipyards could provide the incentive. Radford says there are obvious lessons to be learned from the UK’s export-powered luxury car industry.

Global Pharmaceuticals: From 2000 to 2010, British pharmaceutical manufacturing was the UK’s fastest growing export sector, with the real value of exports more than doubling in just 10 years. Then investment began shifting to countries, such as Ireland, with more attractive tax regimes. This report argues that without decisively re-balancing the tax calculus for global pharmaceutical companies, investment in pharma manufacturing will continue to slide overseas. He suggests creating a low-tax enclave in Northern Ireland that will entice investment back across the border.

Offshore Wind Power: The decade 2020–2029 will likely see the UK install more offshore wind-generating capacity than any other country in the world. But UK offshore windfarms are largely dependent on imports. As developed economies turn to renewable power, the UK is missing out on a major new area of manufacturing. Responding to this vast new global market, the UK should aim to become a global leader in offshore wind engineering, technology and services.