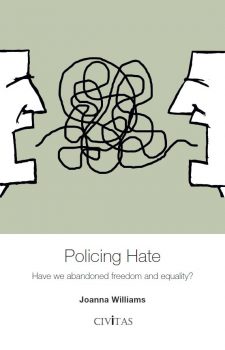 Policing Hate: Have we abandoned freedom and equality?

Attempts to criminalise speech that some consider to be hateful have a long history, dating back to blasphemy laws passed in the medieval period and which were not fully rescinded until earlier this century. The Race Relations Act (1965) prohibited ‘incitement to racial hatred’ and since this time, a myriad of new offences have been created, primarily through amendments to Public Order and Criminal Justice Acts – with speech further regulated through the Football Offences and Communications Acts.

In this report, Joanna Williams explains the resulting cumbersome and complex mess – that is, the myriad Acts of Parliament and official police guidance designed to clamp down on speech and behaviour often deemed, in the eyes of victims or the perception of observers, to be motivated by hostility.

With police in England and Wales recording over 100,000 hate crimes, it is often assumed that hate crime is on the increase. However, definitions of hate crime are subjective and depend upon the perception of victims and observers. As the author argues, it is in the interests of activists, campaigning on behalf of a particular identity group, to present hate crime – and therefore the need for protections and additional resources – as increasing.

With attempts to clarify and make the law around hate speech more coherent – through the Hate Crime and Public Order Bill in the Scottish Parliament and the Law Commission in England and Wales – Joanna Williams identifies serious concerns about the impact of legislation on free speech.

By exploring the history, current context and impact of hate crime legislation and drawing upon interviews with academics and campaigners, the report explores the current challenges to equality before the law and free expression.

The author concludes that there should be no extension to existing hate speech legislation. The report finds that no special ‘characteristics’ should receive legal protection in a way that violates the principle of equality under the law. The author proposes that groups with a vested interest in presenting their members as victims of hate crime should not influence hate crime legislation. A future inquiry should be held to review all elements of the law that conflict with freedom of speech.