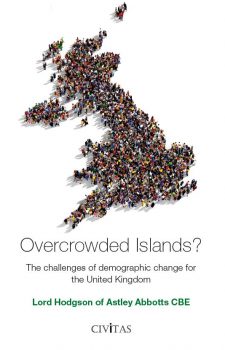 The UK population has grown fast in recent years – an increase of 6.6 million since 2001 with a further increase of 5.6 million expected by 2041. Even for a geographically small island, the UK is relatively crowded by comparison with France and Germany. Indeed, an overwhelming majority of British people think that the country is already overcrowded and that steps should be taken to prevent population pressures becoming greater.

In this thoughtful and persuasive pamphlet, Lord Hodgson of Astley Abbotts takes stock of the scale of this change for the UK and the challenges it will bring. Whilst acknowledging the huge value that new arrivals bring to this country, the pamphlet argues that we have been careless about their impact on the economic position of the ‘settled population’ – defined as being all members of our society irrespective of race, colour or creed – as well as the non-economic consequences of rapid population growth for our society – in housing, environmental degradation, water shortages, food security and our sense of national belonging.

Demography has a long fuse. Any potential policies set in train now will only reach their full demographic implications in the 2030s and beyond. But the challenges posed by rapid population growth have traditionally received very limited attention from successive Governments, focused on short-term electoral cycles.

To develop a much-needed and much-desired national strategy, a Demographic Authority should be urgently established, modelled on the Office of Budget Responsibility (OBR) which has proven to be successful in providing independent and authoritative analysis of the UK’s public finances. By establishing a proper evidence base and devising long term strategies to meet the challenges of population growth, the demographic ‘long fuse’ can be forever saved from the long-grass.

Lord Hodgson writes on the report in The Telegraph, ‘Time for a grown-up conversation about population change’