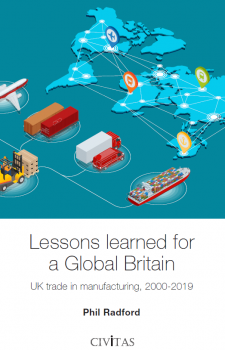 Lessons learned for a Global Britain: UK trade in manufacturing, 2000-2019

Contrary to common perception, this analysis of the UK’s top ten manufacturing sectors shows that the real value of exports to the EU was lower in 2019 than in 2000 – after adjusting for inflation and extracting the value of precious metals. Neither is this stagnation a Brexit phenomenon. As trade analyst, Phil Radford shows, UK manufacturing exports pivoted decisively away from EU markets in the two decades before the UK’s exit from the Customs Union.

Critically, this study shows that manufacturing is vital to UK trade. It delivered 88 per cent of UK goods exports in 2000, and 87 per cent two decades later. In global markets, UK manufacturing is already a quiet achiever. While the UK’s EU exports stagnated, manufacturing exports to countries outside the EU grew by 2.6 per cent per year from 2000 onwards – with some sectors enjoying a stellar performance. The growth rates for the UK’s automotive, aerospace and pharmaceutical exports easily outpace the aggregate economic growth rates of the UK’s non-EU trade partners over the same period.

Some specific sectors of UK manufacturing are highly competitive in global markets. They are testament, Radford finds, to a spirit of endeavour among the UK’s globally-minded manufacturers. The report also identifies the stark failures in the UK’s manufacturing trade, providing valuable insights into UK trade policy. And it asserts that there is no connection between the apparent benefits of seamless, tariff-free trade with the EU, and the actual export performance of UK manufacturing sectors.

The author’s sector-by-sector analysis of UK manufacturing trade shows that the imbalance between export and import growth rates in UK–EU trade has created a series of ‘captive markets’ in certain sectors in the UK – and that the new UK–EU trade deal could entrench past trends rather than abate them. Neither can we assume that trade in services with the EU can compensate for the UK’s deficits in manufacturing trade. The report concludes with several policy recommendations to support ‘levelling up’ policies, by identifying industries and subsectors outside London that have already proved competitive in global markets.