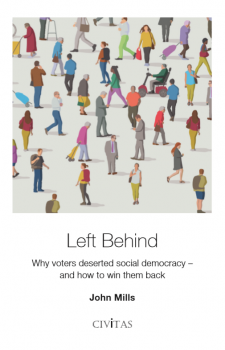 Left Behind: Why voters deserted social democracy - and how to win them back

Something has gone badly awry with social democracy in recent years. Not so long ago, government by centre-left parties seemed almost to be the natural order of affairs in stable and prosperous economies.

Today the position is very different, as voters have turned their back on them across much of the west. Where such parties have fared better – as in the UK – this tends to be associated with a shift towards a more radical left-wing platform.

What has caused this collapse in support for centrist policies? Here, economist, businessman and lifelong Labour supporter John Mills describes how this has happened – and what might be done to arrest the decline of social democratic politics before it is too late.

He traces the centre-left’s political difficulties to its poor record of achieving good economic growth while in office, and its ineffective critique of others while in opposition. This stems from its abandonment of Keynesian in the 1970s and its too-eager embrace of monetarist – and then neoliberal – economic prescriptions thereafter.

Such policies have failed to deliver in the long run for millions of people who have come to be known as the Left Behind. These voters feel angry and alienated and see no remedy for their ills from the traditional social democratic politicians to which they previously turned.

Reaction: Social democrats need to get a handle on the economy – or face decades in opposition, by John Mills