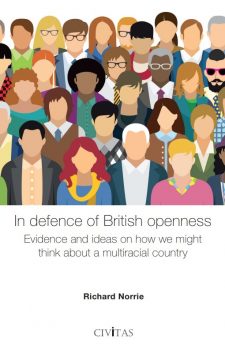 In defence of British openness: Evidence and ideas on how we might think about a multiracial country

Richard Norrie, director of the Statistics and Policy Research Programme at Civitas takes a forensic look at multiracial Britain.

In this major new study of multi-ethnic Britain, Richard Norrie makes the case that ethnic minority individuals fare better here than in the familial countries of origin, with a confident minority middle-class. Comparing the prospects of black people in this country to other European countries also reveals a positive picture, despite real problems that exist.

Moving to recent efforts by the Government to address ethnic differences, the author examines the fall out from the Sewell report which provoked ‘fire and fury’ from the commentariat for finding that whatever statistical differences there were between ethnic or racial groups, they more often than not had little to do with either race or racism. The report finds these commentators are ‘wide off the mark, often resorting to critiques that the report “denied the lived-experience”, without any objective basis on which this claim could be measured or judged.’

The Sewell report doesn’t escape criticism either for recommendations that the author terms ‘technocratic’. The report then turns to the fortunes of the ‘white working-class’, arguing that they are not a ‘victim group’.

It is shown that government interventions, such as ‘graduatisation’ and the apprenticeships levy, have penalised working-class people by increasing the costs of getting on in life, as well as causing the supply of apprenticeships to dry up.

Richard Norrie examines the fallout from the recent European football championships and shows the level of racial abuse aimed at black English players was low, and much of it from overseas. It is argued that the ‘taking of the knee’ is a symbolic gesture that antagonises some supporters.

This report is a defence of British institutions and provides a different way to think about race, that sees people of an ethnic minority as inheritors and custodians of the British way of life as much as anyone else, sharing responsibility for its defence and upkeep.