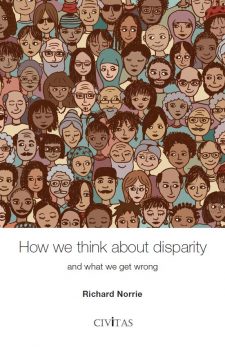 A government-appointed Commission on Race and Ethnic Disparities has been set up to address disparity between ethnic or racial groups in outcomes relating to health, education, employment and other areas. This follows numerous reviews conducted by various governments since 2010.

Drawing on the full array of existing reviews, this report by the Director of the Statistics and Policy Research Programme at Civitas, Richard Norrie, examines the intent behind them, the empirical base, the inferences that are drawn and the thinking behind the recommendations made.

It is argued that while we are adept at identifying disparity in statistics, we struggle to say why it exists or to provide a moral theory as to why it might be wrong. It is easy to say why discrimination based on ethnicity or race is wrong, since it violates liberal principles of equality before the state and of judging people on individual merit, not immutable characteristics over which they have no control. Disparity is more difficult: there can be innocent reasons why groups may have different outcomes, such as differences in age, or geographic region.

The author finds that a decade of various reviews never go so far as to say disparity and discrimination are the same thing, only that they tacitly allow the moral critique reserved for the latter to flow over onto the former. This begins to provide a moral basis for government intervention, as well as a sense of purpose and virtue for politicians. All of this has hinged upon statistics – but those very statistics are flawed in terms of missing data, confounding variables, and the problem of inferring causation from correlation.

Richard Norrie argues that the Government’s existing Race Disparity Unit might better serve the country by looking to evidence and measure discrimination rather than disparity over time. While disparity is ambiguous, discrimination can be evidenced. Doing so would provide a better rationale for government intervention and engender greater trust. While disparity is inevitable since groups differ in many ways, it is concluded that does not mean we cannot strive for better. Better solutions and improvements can be found – but targeting groups rather than individuals might be inefficient as well as foster a culture of resentment.