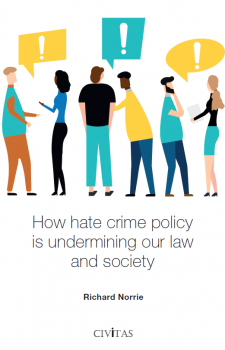 How hate crime policy is undermining our law and society

Politicians, activists, celebrities and senior police officers appear united in their highlighting of apparent surges in hate crimes in recent years. But this report by the Director of the Statistics and Policy Research Programme at Civitas, Richard Norrie, offers a critical appraisal of the ideas behind what we call ‘hate crime’ as well as the evidence for it. While crime motivated by hatred is to be condemned, he argues, ‘we have ushered in a response to it that is corrosive’.

It is argued in this report that we have entered into a new way of doing law, that sees thought as something to be punished where it leads to crime. Hate crime legislation which could be traced back to legal attempts to penalise the incitement to violence now stands for the punishment of offensive ideas – as well as introducing inequality before the law.

The author questions the interpretation of police statistics which have tended to fuel media stories of a rising tide of hatred. The government has often made it a priority to tackle hate crime – funding many organisations that have a vested interest in talking the problem up – despite also acknowledging it to be declining.

This report finds that this approach has led to the police prioritising crimes which are relatively trivial and may not even be crimes at all. The outcome in our resulting public discourse is that we are fuelling a story about our country that is not true, serves to do us down, and lowers expectations. Most damming of all, ‘getting the numbers up’, the author finds, has not resulted in a rise in prosecutions or convictions. In the meantime, an honest appraisal of the best available evidence reveals acts of racial hostility, from violence to verbal abuse, to have declined substantially.

The author concludes that the government should legislate for the enhanced sentencing of crimes motivated by hatred where it is clearly evidenced that harm and culpability are greater. We need to reign in the vested interests, as well enhance the way in which we measure hate crime statistically, if we are to pave the way for a more honest appraisal of hate crime.