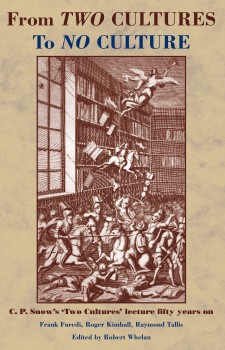 In 1959, C.P. Snow delivered a lecture in Cambridge entitled ‘The Two Cultures and the Scientific Revolution’. Snow warned of a gap that had opened up between scientists and literary intellectuals. The latter were not only ignorant of science, but contemptuous of it – as if scientific knowledge were unnecessary for a good education.

In 1962, an influential literary critic, F.R. Leavis, launched an attack on Snow of unprecedented ferocity, arguing for the superiority of literary studies. The debate has raged ever since. Should science or the humanities be given precedence? Should education aim at the moral formation of the individual or address the world’s practical problems?

However, lack of scientific knowledge is no longer the main failing in our education system. The rot has spread.

As Robert Whelan writes: “The problems that now characterise our education system are no respecters of subject boundaries. English dons are confronted by students who have never read a play by Shakespeare right through, and for whom a novel by Henry James would be unimaginably hard. A history don at Cambridge told me he is teaching undergraduates who do not know what the Renaissance and the Reformation were, or which came first. It is more than a case of dumbing down: the school timetable is now seen by politicians as a weapon to deploy in fighting all sorts of battles that have nothing to do with education, from social cohesion and anti-racism to obesity and teenage pregnancy.

“Boosting self-esteem is more important than telling children which answers are right and which are wrong. The situation is so serious now that it has gone from being a topic for educationalists to debate to an issue of whether or not the culture we have inherited from our parents is going to be passed on to our children.”

This collection of lively and timely essays examines the relevance of Snow’s argument to the current education debate and whether anything can be done to fix the decline in educational standards and attainment.

Read an introduction to From Two Cultures to No Culture in The Daily Telegraph.