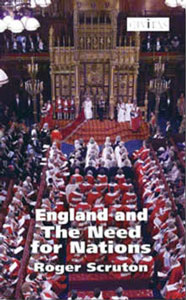 England and the Need for Nations

In this classic Civitas pamphlet from 2004, the philosopher Roger Scruton argues that the nation state is the bedrock of democratic progress and that we abandon the concept at our peril. But a process has been set in motion that is expropriating the sovereignty of our parliaments and courts, and dissolving the nationalities of Europe in a historically meaningless collectivity.

As we stand at a potential turning point in our relationship with the EU, we have to choose whether to go forward to that new condition, or back to the tried and familiar sovereignty of the territorial nation state. Yet our political elites speak and behave as though there were no such choice to be made.

A decade since its publication, Scruton’s message – beautifully and powerfully made – is as vital as ever:
“The case against the nation state has not been properly made, and the case for the transnational alternative has not been made at all. I believe therefore that we are on the brink of decisions that could prove disastrous for Europe and for the world, and that we have only a few years in which to take stock of our inheritance and to reassume it.”

Foreword (by Robert Rowthorn): “The nation state is under threat. It is being undermined by the spread of global corporations and supranational institutions, such as the EU and the WTO.”

Introduction: “Democracies owe their existence to national loyalties – the loyalties that are supposedly shared by government and opposition, by all political parties, and by the electorate as a whole.”

Oikophobia: “The repudiation of inheritance and home. Oikophobia is a stage through which the adolescent mind usually passes. But it is a stage in which some people – intellectuals especially – tend to become arrested. As George Orwell has pointed out, intellectuals on the Left are especially prone to it.”

Roger Scruton is an English writer and philosopher. He is a prolific public commentator and has written over thirty books on a variety of subjects. He is a visiting professor in Philosophy at Oxford University

Scruton is also a regular contributor to The Spectator and a contributing editor of The Atlantic. He is a senior fellow at the Ethics and Public Policy Center in Washington DC.