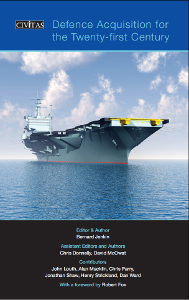 Defence Acquisition for the Twenty-first Century

The recent campaigns in Afghanistan and Iraq came at a heavy cost to Britain’s military capabilities. However, rather than replenish the forces with the equipment they needed, spending reviews in the last parliament saw defence expenditure so drastically reduced that the equipment used up in the campaigns cannot be replaced. These cuts have left all three services with large deficiencies in key areas.

There is now considerable doubt among military experts that Britain will be able to maintain its NATO commitment of spending two per cent of GDP on defence, and this is at a time when new challenges and mounting uncertainty in the world are likely to require our armed forces to be used at short notice, and in circumstances which demand a more agile and adaptable military.

These issues have not received the attention they deserve. There is even less acknowledgement of what is at stake in downscaling Britain’s defence production capabilities and capacity. Key defence industrial programmes can take decades to mature and R&D requires a much greater investment if it is to produce benefits. Without immediate action to reverse this situation, the UK will lose even more of its important technological capacity and know-how that cannot easily be recovered.

Defence Acquisition for the Twenty-first Century lays out a completely new case for the UK to adopt a radically different acquisition strategy; one which is much more cost effective and would allow for the adaptability, agility and flexibility essential to modern militaries.

This book sets out the challenges ahead for defence acquisition and proposes novel changes to the structure and culture of MoD and Whitehall generally to help the UK to meet those challenges. Among other suggestions, it makes the case for maintaining Britain’s industrial capacity to manufacture equipment when it is needed, rather than focusing on maintaining the standing capacity of the forces; it proposes establishing a system of long-term investment for defence with financial arrangements that extend beyond the life-cycle of a parliament; it recommends exploiting the huge pool of talent available in smaller enterprises rather than relying solely on increasingly inflexible and unsustainable prime contractors.

Bernard Jenkin MP was first elected to parliament in 1992. He has subsequently served as Shadow Defence Secretary, where he campaigned for more equipment and greater funding. Between 2006 and 2010, he sat on the House of Commons Defence Select Committee. He is a regular commentator on defence, security and foreign affairs and a contributor to Diplomat magazine. He has twice addressed the annual IRIS (Institut de Relations Internationales et Stratégiques) Paris conference on missile defence and was a member of the Chatham House European Security and Defence Forum, a three year project looking at the future of NATO and EU Defence. In 2007, he authored a paper for Conservative Way Forward entitled Defence Policy for the UK: Matching Commitments with Resources.