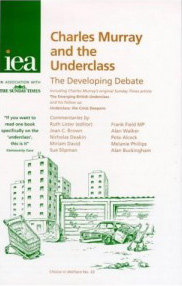 Charles Murray and the Underclass

In 1989, the American sociologist Charles Murray visited Britain in search of the ‘underclass’. Murray described himself at the time as a ‘visitor from a plague area come to see whether the disease is spreading’. According to him, it was.

“When I use the term “underclass”, he wrote, “I am focusing on a certain type of poor person defined not by his condition, for example, long-term unemployment, but by his deplorable behaviour in response to that condition, for example, unwillingness to take jobs that are available to him.” Murray noted that there had been a rapid increase in the number of children born into homes with no resident father and where the home was subsisting on state benefits. Four years later, he returned to warn that the crisis of the underclass was, in fact, only deepening.

The two controversial essays which Murray wrote about these experiences have finally been collected here in one volume, together with a number of critical commentaries and a rejoinder from Murray to some of the most relevant criticisms. Contributors include the Labour MP Frank Field and the newspaper columnist Melanie Phillips.

Many of these commentaries disagree with Murray quite sharply and in a number of interesting and pertinent ways. But, some aspects of his thesis have recently become more difficult to resist – especially in the wake of the August 2011 riots, which the serving Justice Secretary, Kenneth Clarke, blamed on a lawless ‘feral underclass‘.

Charles Murray is one of America’s most respected social policy analysts. His ideas about the substratum of society that he detected, the ‘underclass’, have entered the mainstream of the debate around poverty. In 1994, he published the bestseller, The Bell Curve, an examination of the relationship between intelligence and socioeconomic performance. He is a prolific commentator for a number of newspapers and journals.