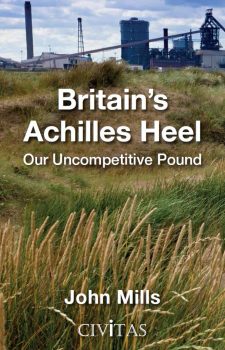 Why is economic growth and prosperity in the world so patchy and unstable? Why have incomes for so many people stagnated? Why is there so much inequality – and why is there so much debt? Are all these conditions inevitable or are there more effective ways of ordering our economic affairs to achieve better results?

In this new book, the economist and entrepreneur John Mills confronts these questions and shows how the problems we face are not insoluble – if we are prepared to learn the lessons from the past. Drawing extensively on economic history, he demonstrates how the current policy framework is flawed and how a radical new approach is needed to close the divide between those who have done well out of globalisation and those who haven’t.

At the root of our difficulties lies an economy that has been allowed to become uncompetitive because of the long-term strength of the pound and unbalanced because of the deindustrialisation that has ensued. Reversing this process calls for a commitment to re-expanding the UK’s manufacturing base that must start with an activist exchange rate policy designed to keep the price of sterling down.

‘The UK electorate does not look likely to tolerate in future the static wages and lost opportunities from which far too many have suffered. Those who have done well need to pay more attention to the lot of those who have not been so lucky. Using an activist but benign exchange rate policy as the lever for doing so has a much better chance of success than any other policy option on the horizon.’ – John Mills

Read an extract: Those who have done well out of globalisation need to pay more attention to those who have not been so unlucky

“The vote to leave the European Union highlighted the fault lines in modern Britain between those doing well out of the economy and those not so fortunate. John Mills’s timely book shows that this rift will only be healed by strengthening the UK’s manufacturing base through higher investment and a more competitive exchange rate.” – Larry Elliott, The Guardian

“John Mills is a rarity – an economist, who commands cross-party respect and who has also excelled in business. His views on the future of the British economy are always worth reading. Mills has much to contribute to our national debate.” – Liam Halligan, journalist and broadcaster

“This is an excellent book. John Mills provides a compelling case for the vital role that a competitive exchange rate can play in boosting the UK’s economic prospects and living standards.  It is an absorbing and easy read, containing some powerful economic messages.” – Dr Gerard Lyons, leading UK economist

“John Mills is one of our most radical thinkers about the state of the economy. Economists and policymakers need to give his ideas serious attention.” – Roger Bootle, Chairman, Capital Economics

“John Mills lays bare the entrenched and avoidable mistakes in economic policy which have handicapped our economic performance for so long and offers a compelling analysis of how best to correct them. Policymakers please take note.” – Bryan Gould, former Shadow Chief Secretary to the Treasury

“All too often a ‘strong pound’ is regarded as an unchallengeable ‘good thing’, whereas the truth is just the opposite, as John Mills makes abundantly clear. This is a stimulating, challenging and timely read. Its message should be heeded by all.” – Ruth Lea CBE, Arbuthnot Banking Group

“John Mills makes the case clearly that an over-valued pound – propped up by the endless sale of assets – has seriously harmed us over the years.” – Lord Vinson, former businessman and winner of the Queen’s Award for Industry

John Mills is an entrepreneur and economist who has long been involved with political affairs. He is the founder and chairman of John Mills Limited (JML), which specialises in selling high volume consumer products, using audio-visual methods for promoting their sale both in the UK and in many other countries – about 85 at the last count. His main interests as an economist are the UK’s relationship with the EU and the relatively poor performance of western economies compared with those in the East.

He was for many years a senior Labour elected member of Camden Council, the London Boroughs Association and the Association of Metropolitan Authorities, and in the late 1980s he was Deputy Chairman of the London Dockland Development Corporation. He was chairman and then deputy chairman of Vote Leave, joint chairman of Business for Britain and the founder of Labour Leave, all campaigning for Brexit during the run-up to the June 2016 EU referendum. He is on the board of OpenDemocracy, vice-chairman of the Economic Research Council and chair of both The Pound Campaign and Labour Future, all concerned in different ways with the UK’s economic and political prospects. He is a frequent commentator on TV and radio and he has a large number of published books, articles, pamphlets and tracts to his credit.