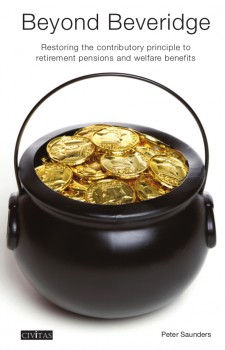 Beyond Beveridge: Restoring the contributory principle to retirement pensions and welfare benefits

In this important examination of state welfare, Peter Saunders proposes a sweeping overhaul of the benefits system, which would see National Insurance abolished and replaced with a system of personal welfare accounts that would put the contributory principle back at the heart of social security.
The accounts could be used for saving, insurance and even loans – helping people spread the costs of unemployment, parental leave, higher education and old age across their lifetime.

Saunders proposes that everybody in work should be compelled to save into a private pension as the universal state pension becomes increasingly unaffordable. Means-testing the state pension is not only sensible but may soon be unavoidable as the cost to the taxpayer continues to escalate, he argues. But shifting to a means-tested system will require an end to the right to opt-out of workplace pension schemes, in order to mitigate the risk of moral hazard.

“National Insurance is in a sorry state. Its design no longer fits current needs and it requires a radical re-think. But to allow the whole thing to collapse without rescuing and restoring the contributory principle at its heart would be a major mistake for which future generations would rightly chide us.

Moving to a system of personal welfare accounts would give people more control over their own savings. It would be more efficient than having the government doing it for us, it would strengthen work and savings incentives, and it would promote a stronger sense of personal and civic responsibility.”

“…a credible plan for a means-tested state pension…” – The Economist

Peter Saunders is a Professorial Research Fellow of Civitas, and author of Social Mobility Myths (2010) and The Rise of the Equalities Industry (2011), both published by Civitas.

Until 1999, he was Professor of Sociology at the University of Sussex, where he is still Professor Emeritus, and he has held visiting academic posts at universities in Australia, Germany, New Zealand and the United States. After 1999, he worked as Research Manager at the Australian Institute of Family Studies, and as Social Research Director at the Centre for Independent Studies in Sydney, where he remains a Distinguished Fellow. In 2008 he returned to the UK where he is an independent writer and consultant.