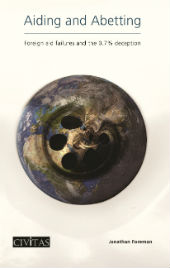 Aiding and Abetting: Foreign aid failures and the 0.7% deception

At a time of cuts in public expenditure, the Coalition government has committed not only to maintain the foreign aid budget but to increase it. It has set a target of 0.7% GDP, even though opinion polls show that it is unpopular with the public.

In this timely survey of the effectiveness of international aid, Jonathan Foreman argues that public scepticism is justified.

After six decades and more than three trillion dollars of official development aid, there is scant evidence for its effectiveness. Instead of promoting economic growth, aid seems more likely to subvert good government, enrich corrupt tyrants, and subsidise warlords.

Foreman does not argue for an end to aid, but rather that it should rest on realistic assumptions about the likely fate of donations to the governments of poorer countries, UN agencies, international bureaucracies and large charities. His recommendations include an abandonment of the 0.7 per cent target; a Royal Commission to investigate the purpose of foreign aid; the transfer of one-third of the aid budget to the armed forces; and the funding of the BBC World Service from the aid budget.

Jonathan Foreman is a writer, researcher and editor based in London and New Delhi. With an academic background in history and law, his primary areas of interest are urban policy, security and defence, South Asian affairs and film. He was one of the founders of Standpoint magazine.