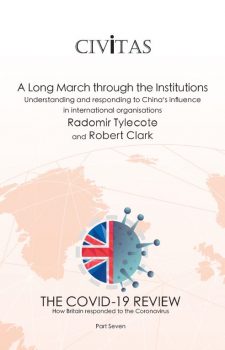 A Long March through the Institutions: Understanding and responding to China’s influence in international organisations

The Covid-19 pandemic has accelerated a reassessment among Western powers of their approach to China. This report by Radomir Tylecote and Robert Clark analyses China’s strategy towards international institutions and indicates that there are two ‘fronts’ to China’s contemporary expansionist strategy.

• The first is to influence and potentially co-opt existing organisations such as UN bodies;
• The second is to create rival Chinese-dominated international institutions to propagate political norms and promote China’s regulatory and technical standards.

The authors’ analysis of China’s actions in the World Health Organisation (WHO) and in other core UN agencies demonstrates how Beijing is utilising this influence to promote a wide strategic agenda. The report also analyses China’s activities in international technology standard-setting organisations (SSOs), where Beijing aims to internationalise its technology standards, which it increasingly sees as ‘strategic weapons’ – including for increasing state control of the internet and facial recognition. Finally, through the Belt and Road Initiative (BRI), China is developing its own group of organisations including the Asian Infrastructure Investment Bank (AIIB), a potential rival to the World Bank, and the Shanghai Cooperation Organisation (SCO), a counter to NATO.

The authors therefore draw up a series of recommendations for domestic and international responses, including:

• The UK should, as a strategic priority, act in concert with the US and willing Commonwealth partners in a ‘strategic planning group’ to form common positions, including responses to violations, and to push for the reform of international institutions.
• The UK government should investigate a full suite of restrictions, and in some cases sanctions, against certain companies, systematically outlining the rationale for an ongoing system of responses.
• The UK’s response should use the upcoming integrated defence, security and foreign policy review to reassess domestic dependency on Beijing such as on Chinese imports, Chinese direct foreign investment and corporate takeovers.
• The UK should ensure the establishment of a D10 alliance which would include the G7 countries (Japan, Italy, Germany, France, the UK, US, and Canada), in addition to India, South Korea and Australia, to develop a competing digital infrastructure with more robust global technology standards.