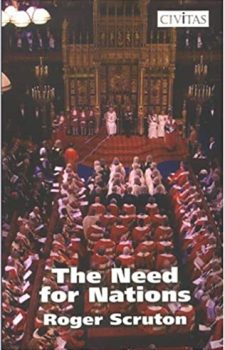 The Need For Nations

In this classic Civitas pamphlet from 2004, the philosopher Roger Scruton argues that the nation state is the bedrock of democratic progress and that we abandon the concept at our peril. But a process has been set in motion that is dissolving the nationalities of Europe in a historically meaningless collectivity.

Scruton’s message – beautifully and powerfully made – is as vital as ever:
“The case against the nation state has not been properly made, and the case for the transnational alternative has not been made at all. I believe therefore that we are on the brink of decisions that could prove disastrous for Europe and for the world, and that we have only a few years in which to take stock of our inheritance and to reassume it.”

Note on the 2020 Commemorative Edition
This is the text of the 2004 edition and is republished to commemorate the untimely death of Sir Roger Scruton in January 2020.