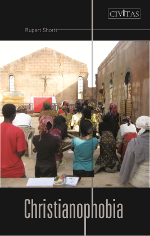 Many faith-based groups face discrimination or persecution to some degree, but Christians are targeted more than any other body of believers. Rupert Shortt, Religion Editor of theTimes Literary Supplement, looks in this report at examples of Christianophobia from Egypt, Iraq, Pakistan, Nigeria, India, Burma and China.

Christianity is in serious danger of being wiped out in its biblical heartlands because of Islamic oppression. But Western politicians and media largely ignore the widespread persecution of Christians in the Middle East and the wider world because they are afraid that they will be accused of racism. This report, by a distinguished religious expert, lays bare the scale of the vendetta against Christians across the globe.

Christians are more likely to be the target of discrimination or persecution that any other religious group and they are particularly at risk in Muslim-dominated societies. Oppression is magnified by anti-Americanism and the false belief that Christianity is a “Western” creed, even though it originated in the Middle East and has been an integral part of that region’s belief systems for 2000 years.

Western liberals fail to appreciate that in the defence of the wider concept of human rights, religious freedom is the canary in the mine. The refusal of young Christians in the West to become radicalised and mount violent protests against the attacks on their faith also helps to explain the blind spot about Christianophobia in influential liberal Western circles.

In this vital and topical report, Shorrt quotes expert findings that between a half and two-thirds of Christians in the Middle East have left or been killed over the past century. The pace of this assault is now intensifying with the ascendancy of militant Islam in countries such as Egypt, Iraq and now, more recently, Syria.

The question he asks is of vital interest to an increasingly multicultural West: is the problem within Islam itself or is it dependent on contingent factors?

Rupert Shortt is Religion Editor of The Times Literary Supplement and a Visiting Fellow of Blackfriars Hall, Oxford. His other publications include Rowan Williams: An Introduction (2003), God’s Advocates: Christian Thinkers in Conversation (2005),Benedict XVI: Commander of the Faith (2005) and Rowan’s Rule: The Biography of the Archbishop (2009).