Small Is Not Always Beautiful

Move to smaller commissioning organisations in the NHS may hurt patients

The Coalition Government’s proposals to transform commissioning in the NHS flies in the face of international evidence, according to a new report by independent think tank Civitas in conjunction with the Manchester Business School.

The Government intends to replace 152 Primary Care Trusts (PCTs) with ‘consortia’ of general practice, which is likely to lead to a proliferation of much smaller commissioning organisations. In a King’s Fund survey of 1,000 doctors released earlier this week, just 23% felt this reform would improve patient care. The Civitas/Manchester Business School report,GP commissioning: does size matter?, shows that doctors are right to be sceptical: the move may well harm patient care.

The report shows that there is little, if any, evidence that smaller organisations are better at commissioning than larger ones. It also argues that the transition will be costly, almost certainly resulting in a dip in performance in the short to medium term.

James Gubb, director of the health unit at Civitas and co-author of the report, said:

The Coalition Government must consider the full financial implications of their proposals for the NHS. Although size of commissioning organisation is clearly not the only factor influencing the proposed shift of commissioning responsibility from PCTs to GP consortia, the evidence presented here does not provide a strong basis for the reforms.

The report looked at international trends in the commissioning (or ‘purchasing’) of health care (see Table 1). In the 10 European countries analysed: 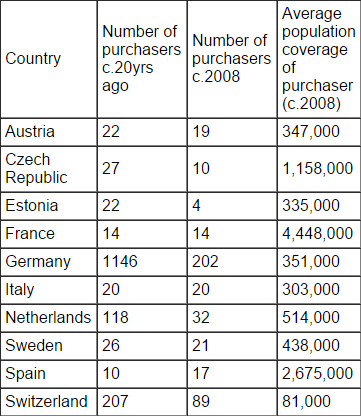 Smaller PCTs no better at commissioning than larger PCTs

The report also looked at data on the commissioning performance of PCTs over the past five years and found no relationship at all between the size of a PCT and its performance in terms of: outcomes achieved, use of resources (the Care Quality Commission’s Annual Health Check) and standards of commissioning (the World Class Commissioning framework).

None of these points justify a likely move to smaller commissioning organisations.

The proposed shift of commissioning from PCTs to GP consortia is, in reality, yet another centrally planned reorganisation of the NHS. A particular organisational form is being mandated, and a timetable for implementation is being centrally imposed.

The authors of GP commissioning: does size matter? put forward an alternative strategy. They argue that the Government should decentralise control over commissioning in the NHS by creating a permissive and flexible framework to allow commissioning organisations to merge or demerge, and to change organisational arrangements for themselves.

Commissioning organisations that perform poorly could be encouraged or supported to change, with less successful organisations being taken over by better performers through mergers, split up through demergers, or taken over by entrepreneurial groups of health professionals including GPs. Organisational change then could be evolutionary, locally initiated, and more responsive to local performance and contextual factors.

Kieran Walshe, Professor of Health Policy and Management at Manchester Business School and co-author of the report, said:

There is a certain obvious irony in the Coalition Government titling its White PaperLiberating the NHS, but in reality introducing another top-down reorganisation.

It is likely that GP consortia will cover smaller populations than existing PCTs: there is little, if any, theoretical or empirical evidence to suggest this will lead to better commissioning – particularly when coupled with recent studies that suggest the transition will be costly and almost certainly result in at least a short-term dip in performance.

i. James Gubb is director of the health unit at Civitas, a post he has held since 2007.

iii. Civitas is an independent social policy think tank. It has no links to any political party and its research programme receives no state funding. Civitas’s health policy research seeks to take an objective view of health care in Britain. It aims to offer an improved perspective on how best to deliver equitable and high standards of health care for all.

iv. The report NHS White Paper proposals for GP commissioning: does size matter? can be downloaded below.