2011: the Start of a Great Decade For Criminals?

The Government has announced a 20% real terms reduction in police funding over the next four years, starting with a 6% cut in the national funding grant this year. Satisfying this proposal is likely to involve dramatic staff reductions, including of frontline police officers. Policing and Criminal Justice Minister Nick Herbert has admitted the cuts will be ‘challenging’ for police forces. But what will be the impact on the general public? In this briefing, we show that there is a strong relationship between the size of police forces and national crime rates. As a result, this cut might turn out to be costly for the British public.

Using data from the European Sourcebook of Crime and Criminal Justice Statistics, we compare the number of police officers per 100,000 population and recorded offences per 100,000 population. We present the data from 2006 as it is the most recent year provided by the European Sourcebook with a reasonably complete dataset. However, the resulting pattern is similar in all the years (2003-2007) that the latest Sourcebook covers. We have included all full members of the EU where both police numbers and recorded offences are available for 2006. 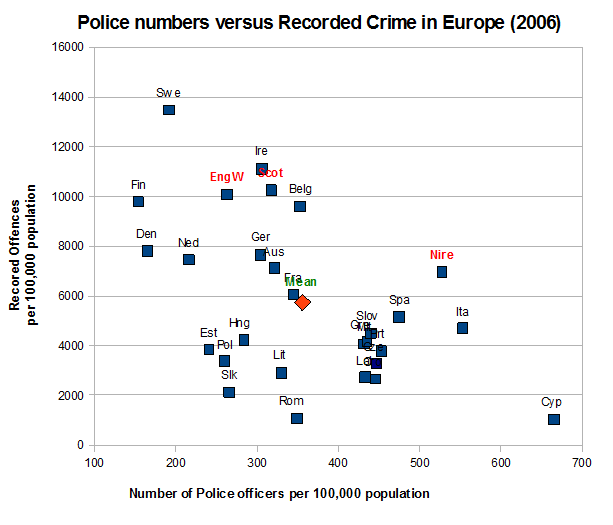 The data suggest an association between police officers per head of population and crimes per head. A nation with a larger proportion of police officers is somewhat more likely to have a lower crime rate. A nation with fewer police is more likely to have a higher crime rate. For example, England and Wales currently has a smaller number of police officers per 100,000 than the European average and has a higher crime rate than average. There is a prima facie case to suggest that this relationship may be causal since the main purpose of a police force is to protect the public and prevent crime. In other words, it is plausible to suggest from the data that reducing the number of police officers in any given country could lead to an increase in the crime rate. Can this claim be supported by more academic approaches to the evidence?

Findings consistent with other evidence for England and Wales

A number of academic studies have examined possible causes of variations in recorded crime rates. The most robust studies suggest that successful police interventions are associated with the most significant reductions in crime, more than other criminal justice interventions and also many economic and social factors. Both detection rates (the proportion of recorded offences that are solved by police) and ‘risk of conviction’ are consistently negatively correlated with crime rates. These are also key measures of police strength and effectiveness.

Establishing firm causal relationships is notoriously difficult in criminology. However, crime rates have been consistently negatively correlated with key measures of police effectiveness. Therefore, it is plausible to suggest that police resources play an essential role in tackling crime. While police numbers and resources are far from the only contributor to police effectiveness, it seems highly unlikely that the swingeing cuts now being enacted will be made without significantly decreasing detection rates. The result will be that offenders will be able to engage in criminal acts with a reduced risk of being caught and sanctioned, making criminal acts less risky and more attractive for potential offenders. As a result, it is possible that recent falls in crime will be halted or even reversed. Members of the public are at greater risk of crime in the coming year.

1. Data for this briefing were compiled by Nick Cowen. It can also be downloaded here.

ii. Details of the Government’s planned reductions in police spending are available from the Home Office here.

iii. The European Sourcebook of Crime and Criminal Justice Statistics is published here. The Sourcebook attempts to aggregate statistics in such a way that the data for each nation are presented using the same definition. However, it must be acknowledged that differences in measurement and observation remain.

iv. Civitas is an independent social policy think tank. It has no links to any political party and its research programme receives no state funding.