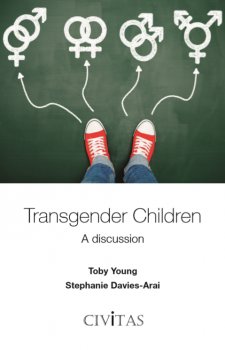 Children registering as ‘transgender’ – that the gender they feel themselves to be is at odds with their biological sex – is a growing phenomenon. Applications by children wanting to change their gender by deed poll have leapt in recent years, as have referrals to the Tavistock, the only NHS clinic specialising in this subject.

This publication features two short essays – one by Toby Young, the other by Stephanie Davies-Arai – considering whether this trend should be a cause for alarm, and whether current approaches to children experiencing gender dysphoria are appropriate.

Trans activists argue that the rise in young people identifying as transgender or ‘gender non-conforming’ is due to the decline of the stigma attached to doing so and, as such, it should be celebrated. Others are concerned that it has become fashionable to identify as transgender and that it is unlikely that the true underlying rate of gender dysphoria is as high as it has recently seemed to be, especially in certain areas.

This in turn raises questions about the policy of ‘affirmation’, whereby children’s feelings about their gender are taken at face value and that, if they wish to transition, they are supported in doing so. This despite the fact that the majority of those with gender dysphoria outgrow it during adolescence – and that there remain significant gaps in medical understanding about the treatments that are provided to those who choose to transition at such an early age.