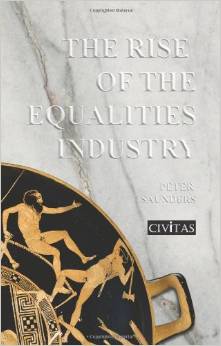 The Rise of the Equalities Industry

To be against equality is to support unfair treatment, and who wants to be unfair? We now have a considerable body of legislation, regulation, monitoring and investigation to ensure that our society respects equality. But what sort of equality do we mean?

Deploying the powers of government to impose equal results suppresses the diversity of talents, aspirations and ideals that make us human. However, public policy is based on what Peter Saunders calls the ‘fallacy of proportionate outcomes’, which assumes that any average difference between groups of people must result from the operation of systematic bias.

The Equalities Industry, which Peter Saunders shows to be vast and almost unopposed, sets out to eradicate bias that is often non-existent and sometimes invented. Consequently, its remedies are not only costly but threaten the freedoms we value in a liberal democracy.

‘Originally established to underpin equality before the law, equality legislation today is perversely undermining that very principle of fair treatment. This is in pursuit of a false utopia of absolute equality for all. But this pursuit will remain completely unrealistic while free people are able to take different decisions, have different aims in life and, inevitably, experience different outcomes.’

“Makes startling reading. Saunders writes well about the long march of aggressive egalitarianism through the institutions. This book ought to be required reading for every employer, and it is a gauntlet thrown down to every member of the equalities lobby.”
Minette Marrin, The Sunday Times

Beware, the equality zealots are unfair and cost us millions The Sunday Times

Peter Saunders is a Professorial Research Fellow of Civitas, and author of Social Mobility Myths (2010) published by Civitas.

Until 1999, he was Professor of Sociology at the University of Sussex, where he is still Professor Emeritus, and he has held visiting academic posts at universities in Australia, Germany, New Zealand and the United States. After 1999, he worked as Research Manager at the Australian Institute of Family Studies, and as Social Research Director at the Centre for Independent Studies in Sydney, where he remains a Distinguished Fellow. In 2008 he returned to the UK where he is an independent writer and consultant