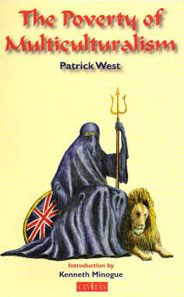 The Poverty of Multiculturalism

We are witnessing the revolt of the civilised against civilisation. Some Western intellectuals, who regard themselves as progressive, have fallen into the strange position of defending cultures that, for example, condone the killing of homosexuals and the virtual enslavement of women.

At the same time, they denigrate the culture of the free societies of the West, which were inspired by the ideals of the Enlightenment – in which universal franchise, free speech and democracy are the norm and the expectation. This is the contradiction ignored by proponents of state multiculturalism, and one that The Poverty of Multiculturalism exposes.

In his analysis of the causes and effects of state multiculturalism, Patrick West argues that we should distinguish between ‘soft multiculturalism’, the idea that minorities should not face discrimination, and ‘hard multiculturalism’, which insists that no culture is better than another, and which believes that society should not only tolerate difference but promote it.

Far from creating tolerance, West argues that this this type of state-enforced multiculturalism often leads to bitter divisions along ethnic lines, splitting communities into hostile factions.

“It is time that we respected our own culture, both as Westerners and Britons,” he writes.

“Western culture has a rich and admirable tradition of social liberalism that says that one should be rendered as much freedom as possible in the private sphere, that one should dress according to one’s desires, worship freely without molestation from the State, be afforded equal rights and participate in culturally-specific ceremonies.

“It is time we cherished the tradition of the Enlightenment, with its aspiration that the prizes of liberty, democracy, colour-blindness, equality of opportunity and progress can be shared among all. We should certainly afford respect to traditional British values which influenced the beneficent aspirations of the Enlightenment.

“While admitting our country’s short-comings in the past, we should desist from perpetually dwelling on them, and recognise that of which we should be proud.”

Chapter 1: “Cultural relativism, the philosophy that no culture is superior to another, is one of today’s widely accepted doctrines. In the twenty-first century, to assert the superiority of Western civilisation over any other culture elicits accusations of eurocentricism, arrogance or even racism…”

Patrick West is a freelance writer. He is also the author of Conspicuous Compassion, available from Civitas.