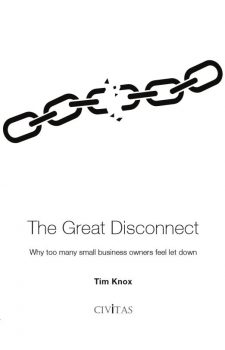 The Great Disconnect: Why too many small business owners feel let down

For the past two decades, politicians from across the political spectrum have been vocal in their praise of small business – often to great acclaim when producing initiatives in government. But, do we know what business owners themselves think of government? As Tim Knox explains in this study on how micro-businesses feel about government, many policies and regulations have imposed heavy burdens on their operations.

Through two original surveys, Knox uncovers a world in which most microbusinesses feel lukewarm, at best, about government policy. The rhetoric of politicians claiming to support small businesses rarely seems to be reflected on the ground. There is even a palpable sense that there are no government co-ordinated businesses services which are intended to help them (despite many such services actually existing). With some business owners claiming things are getting worse, many others indicated a sense of neglect from government for the small business community.

More optimistically, some small businesses did feel that they were coping with tax and red tape demands and remained positive about their interaction with government. Others are less confident. Critically, in one survey, just under a third felt they were not confident of compliance with HMRC and tax requirements and a similar proportion were also not sure of complying with regulations.

When looking into the reasons for dissatisfaction, many owners felt that government tended to listen to big business far more closely to that of small business – as if multi-national companies received a preferential treatment from government. Many reported a sense of neglect and poor communication by government, on top of high tax rates, red tape and a complex system. So, while many politicians repeatedly claim that small businesses form “the backbone of the economy”, the responses provided by small business owners themselves indicate a great disconnect.

Tim Knox is the former Director of the Centre for Policy Studies where he edited and oversaw the publication of over 400 policy papers, many of which led to extensive public re-consideration of received wisdom, while others directly inspired significant policy reforms. Before joining the CPS, he was either the founder or the director of various microbusinesses in London and Budapest.