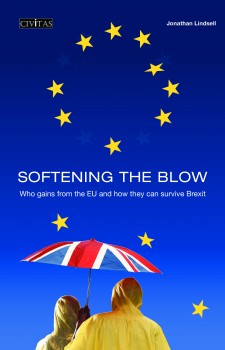 Softening the Blow: Who gains from the EU and how they can survive Brexit

‘Brexit’ – British exit from the European Union – is a distinct possibility.

Although many argue that the economy of an independent Britain will be more successful on the whole, there are sectors in which people feel that they benefit from EU membership. These people are consequently strong critics of the Brexit movement.

In Softening the Blow, Jonathan Lindsell discusses Brexit fears with industry spokespeople, then explores how these could be addressed post-independence. Eurosceptics often present exit as a straightforward utopia and dismiss economic objections.

Lindsell argues that, alone, Britain would need to act decisively to fill the gaps that the EU used to cover, however inadequately. ‘Mirror’ subsidies and R&D funds might be employed to keep industries on a level playing field with EU competitors. Skilled migrants from across the world should be freely employable until a new British cohort is educated to fill technical roles. A hybrid ‘Norwegian model’ would best ensure free trade with Europe while preserving regulatory influence and international clout. Cooperation in specific areas such as fisheries management should be embraced. With the flexibility of independence and a beefed-up Foreign Office, sympathetic government and appropriate policies, even these pro-EU industries might see benefits from exit.

This study draws on interviews with representatives from the National Farmers’ Union; the National Federation of Fishermen’s Organisations; EEF – The Manufacturers’ Organisation; North Eastern Processing Industry Cluster; and the Welsh Finance Minister. These interviews are combined with written evidence from Goldman Sachs, JPMorgan Chase, TheCityUK, the Society for Motoring Manufacturers and Traders, the Automotive Council and the Federation of Small Businesses.

His other reports include ‘Does the EU impede economic growth?’ and ‘Britain should opt out of the EU police and criminal justice measures’. He has written for the Independent, Conservative Home, the Index on Censorship and Open Democracy.