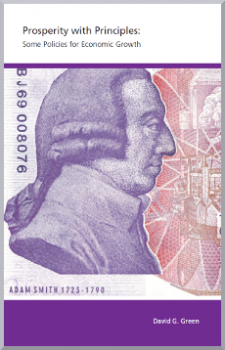 Prosperity with Principles: Some policies for economic growth

The recession has sparked a debate about the renewal of manufacturing. It is now generally accepted that the government should create the conditions in which manufacturing can flourish. How it should do so is strongly disputed.

David Green presents new thinking on how to encourage economic growth without compromising our commitment to free enterprise.He advocates ‘prosperity policy’, which does not dismiss state aid, but instead builds in safeguards to prevent its abuse. Success in manufacturing, especially in all-important export markets, depends on having a comparative advantage. Such advantages including the price, availability and quality often depend on individual companies, but they also depend on the government.

David Green illustrates the value of measures which allow space for both infant-industry protection and for the recovery or adjustment of established companies which get into difficulties. Effective industrial policy should prevent short-term fluctuations from bringing whole industries down. To do so, government should foster the conditions consistent with productive enterprise, including taxation, regulation, the cost of energy and much more.

‘…one of the main problems we face is that some defenders of a market economy think they have to defend formulaic economism and they often do so with the zeal of someone who wants to uphold individual liberty and guard against political absolutism. In truth they are very different ideas…’

David Green is the Director of Civitas. His books include The New Right, We’re (Nearly) All Victims Now and Reinventing Civil Society. He has written for The Times, The Sunday Times, Sunday Telegraph and Daily Telegraph.