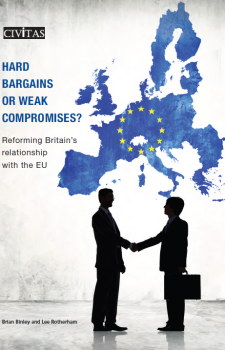 David Cameron has promised that, if re-elected in the 2015 general election, he will renegotiate Britain’s relationship with the EU before putting it to a referendum in 2017. But so far there has been little indication of what sort of deal he hopes to strike.

In this timely and wide-ranging study of the UK’s position in Europe, Conservative MP Brian Binley and academic Dr Lee Rotherham appraise the options for reform and begin to set out the course of action the prime minister must get to grips with – and quickly. Much closer analysis must be undertaken of the pros and cons of British membership of the EU, they argue, and David Cameron must establish his red lines before embarking on negotiation.

Ranging across the gamut of EU competences – from free movement of labour rules to the Common Agricultural Policy, from social and employment legislation to the threat to the City – Binley and Rotherham unpack the arguments and show where policy-making can and must be returned to the Westminster parliament. They weigh the merits of some of the leading proposals for disentanglement and sketch out their own vision of a relationship between the UK and the EU which benefits Britain, by maintaining trade ties while keeping interference from Brussels to a minimum.

The prime minister himself has noted: ‘The biggest danger to the European Union comes not from those who advocate change, but from those who denounce new thinking as heresy.’ Binley and Rotherham here make an essential contribution to such new thinking as they seek to ensure that Britain is not held back by timid considerations of its role in the world. They demonstrate that only fundamental reform will do; minor tinkering might just be enough to win a referendum in 2017, but it will only be counter-productive for all involved over the long term.

‘…making a nugatory deal then managing to briefly sell it in a referendum would ruin any hope of significant EU reform for at least a generation. Indeed, all EU members would be losers. Moreover, UK withdrawal further down the line would become inevitable and far more messy…’

Brian Binley entered parliament after a successful business career in which he set up two companies now employing approaching 300 people. He is MP for Northampton South, and is a member of the Business, Industry and Skills Select Committee as well as member of the Council of Europe’s Parliamentary Assembly. He was chosen to chair the Conservative Party’s Parliamentary Enterprise Group, and also chaired a review into the decline of the high street. He has been elected to the 1922 Committee every year since 2006, and since 2010 has been its Treasurer. As a result he additionally has extensive experience serving on the Conservative Party Board.

Dr Lee Rotherham is an author, research consultant, and a warrant officer in the army reserves who has undertaken three tours of duty. At Westminster, he has advised three shadow foreign secretaries plus a number of other frontbenchers, and was campaign secretary for Conservatives Against a Federal Europe (CAFE). Extensively published, some of his more recent works include The EU in a Nutshell (foreword by Dr David Starkey), A Fate Worse Than Debt: A History of Britain’s National Debt from Boadicea to David Cameron and Manning the Pumps: How to Salvage the Eurosceptic Credentials of the Conservative Party (foreword by Sir Bernard Ingham).