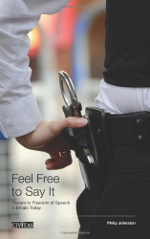 Feel Free to Say it: Threats to freedom of speech in Britain today

Free speech must include the right to say things that most people don’t like or find offensive, otherwise it is no freedom at all.

However, Britain is steadily sacrificing its centuries-old commitment to freedom of speech simply to protect people from hearing views they do not like.

In this exciting examination of the history of free expression since the 17th century, Philip Johnston describes how a raft of laws from recent decades are having “a significant and deeply chilling effect” on public speech.

Public order legislation and ‘hate crimes’ introduced by the last Labour government are being abused by police and prosecutors to circumscribe the long-cherished freedom of UK citizens to speak their own minds without fear of arrest.

Section 5 of the Public Order Act, which was originally introduced to stop Oswald Mosley’s Blackshirts from inciting violence against Jews in the 1930s, has come instead to be used as an instrument of thought control.

Johnston makes the case that more people are being jailed or arrested in Britain today for what they think, believe and say than at any time since the eighteenth century.

He adduces the examples of the Oxford University student who was arrested for calling a police horse “gay”; the teenager who was arrested for barking at two dogs; the woman found guilty of racially abusing her New Zealand-born neighbour by calling her a “stupid, fat, Australian bitch”; and the Christian preacher arrested for saying that homosexuality is a sin.

Some of these examples are farcical, but that is not the point.

There have always been laws in the UK that proscribe free speech if its exercise is likely to lead to a breach of the peace. What we have seen introduced in the past 15 years are laws that constrain the expression of opinions because some people may not like them. They do not even need to be especially traumatised – but merely feel aggrieved.

Johnston charts the progress of thought and legislation around freedom of speech in England since state licensing was abolished in the seventeenth century. In 1644, John Milton wrote in his classic defence of free speech, Areopagitica: “Give me the liberty to know, to utter, and to argue freely according to conscience”.

The vital question that Johnston poses is: “If we are concerned primarily with the social policing of behaviour, is that not better achieved through exhortation and general public disapproval than by sending people to jail?”

Philip Johnston is assistant editor, leader writer and an award-winning weekly columnist for the Daily Telegraph. He was previously the newspaper’s home affairs editor and chief political correspondent. He is the author of Bad Laws.