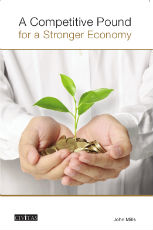 A Competitive Pound for a Stronger Economy

Recessions happen because there is insufficient demand to keep everyone occupied productively. The only solution is more demand, not less. Increases in demand, however, require major contributions from both the private sector as well as the public sector to be sustainable.

Economists and policy makers, however, have a long history of looking the other way and ignoring the need for more demand to combat recessions.

The Austrian School, typified by writers such as Friedrich von Hayek, always maintained that the slumps which followed booms should be allowed to take their course. But at what price? Panic and instability are more often the result than economic harmony.

In this provocative and well-researched pamphlet, John Mills argues that there are, indeed, a number of ways in which we might reignite substantial rates of growth in the West (though perhaps not the growth rates currently being attained by much of the developing world).

As advanced economies move to having an ever higher proportion of their GDP created by services, rather than manufacturing, their growth rates tend to slow in any event compared to economies where manufacturing predominates to a greater extent. This occurs because productivity growth is much easier to secure in manufacturing than in services. The problem faced by many western economies, however, is not whether they should grow at four per cent or eight per cent per annum, but how to achieve any increase in output and living standards at all.

Mills explains that there may be a case for keeping annual increases in GDP modest compared to those in the less developed world. But this is an altogether different proposition to accepting a very serious and damaging prospect of stagnation for years ahead.

This informative and topical pamphlet goes straight to the heart of the austerity policies currently in practice in many Western economies. John Mills’ proposals are radical, and essential reading.

John Mills is an entrepreneur and economist. He is the author of Growth and Welfare: A New Policy for Britain; Monetarism or Prosperity?; Tackling Britain’s False Economy; Europe’s Economic Dilemma; America’s Soluble Problems; Managing the World Economy; A Critical History of Economics; and Exchange Rate Alignments.